THE BARN at wood farm

Alex and I discovered the beauty that is Wood Farm in 2012, moving in after renovating the farmhouse and creating the courtyard of outbuildings. Since then we have immersed ourselves in nurturing the precious ecosystems of meadows, ponds and woodland to create as much biodiversity as possible.  We live here with ‘time and space for nature’, farming organically for conservation and wildlife benefits.

We hope that you will love the place as much as we do. We feel it is truly special and look forward to sharing it with you.

Catcombe Wood consists of 100 acres of old woodland formally classified as “semi ancient” which means it has been mapped since the 1600s, although we suspect that it is much older. As with many of the older woods in England it is mostly oak and ash over hazel coppice. We believe that it is likely that the wood was cleared of all mature timber in 1914 to 1918 as part of the Great War effort and it is therefore no coincidence that most of the mature trees today appear to be around 100 years old. With the new plantings the total woodland comes to 120 acres. Since we arrived we have increased the width of the main rides through the wood and made some new ones. This has had the effect of creating a series of meandering grassy glades bringing in sunlight and generally improving the habitat for both fauna and flora. We have learnt that wildlife thrives on “edge” (or change in habitats) and the more edge you create the more wildlife you will get. By creating the wide grassy rides throughout the wood we are multiplying the “edge” and then adding to it again by having areas of long and short grass and areas of coppicing along the ride sides.

A wonderful feature of the Wood are the magnificent carpets of bluebells in April and May, particularly in the south-east corner just behind The Barn. In this area only, I cut the brambles and other ground cover in the autumn, specifically to favour the bluebells in the spring. Below the bluebells is our lovely lake. It was dug by our predecessor but when we arrived it was surrounded by an earth bank and could hardly be seen from anywhere. We emptied it and re-landscaped the area to create what you see today.  We hope you’ll enjoy a bit of (very) wild swimming! And whilst on the subject, the wellness people talk about “forest bathing”, the Japanese call it “Shinrin Yoku”. Call it what you will, but I urge you to just wander in the wood.  There are miles of paths both big and small and all are mown. Just take the time to lose yourself and enjoy the trees and all the things that live in and around them.

A word about the ancient practice of coppicing hazel; this involves cutting down the multi stemmed hazel trees (ideally every 7 to 10 years) the harvest of which for centuries provided everything from fencing and hurdles to firewood and building materials.  However, the practice died out when modern materials took over. In recent years it has been re-introduced but largely as a tool to aid biodiversity and conservation. If woodland is left unmanaged (and not coppiced) the trees create a closed canopy blocking light from the woodland floor. This shades out the brambles and other woody shrubs which provide food and cover for so many birds and insects. We are currently coppicing an acre or two every year but plan to build this up to three to five acres annually. The coppicing, combined with the long and short grass on the wide rides, creates an ever-changing patchwork quilt of different habitats with multiple edges which, in turn, encourages all sorts of birds and other wildlife. We try to discourage too many deer in the wood as their constant grazing of the tempting young coppice shoots will eventually kill the stools.  This is always a great shame as we have some that are hundreds of years old.

The wood is surrounded by 70 acres of hay meadows and pasture and, again, we manage this entirely for wildlife, biodiversity and conservation using organic practices. Hillside and Gingells, to the west of the wood, are managed as permanent pasture for grazing sheep, whereas the other fields, including the Top of the World and the Pond and Oak Meadows, are managed as hay meadows. The sheep are shut out of these fields from March onwards and the hay is cut late, generally in July and August, to allow time for ground nesting birds, such as skylarks, to fledge their young and for the wild flowers to seed. This is proving very successful and we have ever more cowslips in April and May and an array of wild flowers in May and June including oxeye daisy, knapweed, yellow rattle, ragged robin and at the last count, five varieties of orchids.

Another interesting feature, often taken for granted, are the ancient hedges. These are often very old indeed and provide incredible cover for birds and animals. Of particular interest is the big hedge that runs through the middle of the farm which is the parish boundary between Bremhill and Hilmarton parishes, suggesting that it is at least 500 years old. It is a sad fact that a combination of government policy and modern farming methods since the war have led to the loss of most of our ancient hedges and the ploughing up of over 90%of our old meadows and pastures, and it takes many decades to recreate these.

I would like to think that I have always been a countryman (I attended Agricultural College) and Alex comes from a farming family and studied Botany. However, we are both learning all the time and loving both the experience, and the results. We were much influenced by Isabella Tree’s book, Wilding, a copy of which is in the Barn. Whilst I do not believe that “re-wilding” is the way forward for the countryside, except in exceptional circumstance, the book has changed our thinking and behaviour in many small but significant ways. For example, I used to consider nettles a weed to be eradicated, whereas now I see them as nutritious source of food for many insects, and for ourselves (I can highly recommend nettle soup!). Also, I used to enjoy regular bonfires to clear up fallen trees and keep everything tidy whereas now we hardly ever have a fire and what cannot be used for firewood is left in corners or dragged into the bushes to rot. We intend to continue and build on our conservation programme at Wood Farm.

Finally a word about the Wood Farm Follies and buildings. I’m a frustrated architect at heart and had great fun designing them all. The timber used in their construction all comes out of the wood.  Following a management plan set up with the forestry commission we felled the trees to widen the rides and then brought in a mobile saw bench to process the tree trunks into the required pillars, beams and boards. All three are distinctly different and have their own character. The boat house is self-explanatory, and we also use it as a private place to watch birds and other wildlife. The Oak seat in the glade is really just a lovely place to sit and contemplate, and the Folly is just that, described in the Oxford Dictionary as “a costly structure that is useless”! When we arrived, there was an old red brick chimney on the site which is all that remained of an Edwardian shooting bothy. We then found the doors and the windows in a local reclamation yard and I designed the Folly around the old chimney which you can still see on the outside of the back wall. The room is an exact three metre cube and the veranda is modelled on the design of a Roman Temple using green oak from eight oak trees that stood within 100 yards of the building. The wide ash floor boards are also from the Wood, and we used the oak offcuts to make the Wendy House in “the camp”. We hope you will enjoy them both. 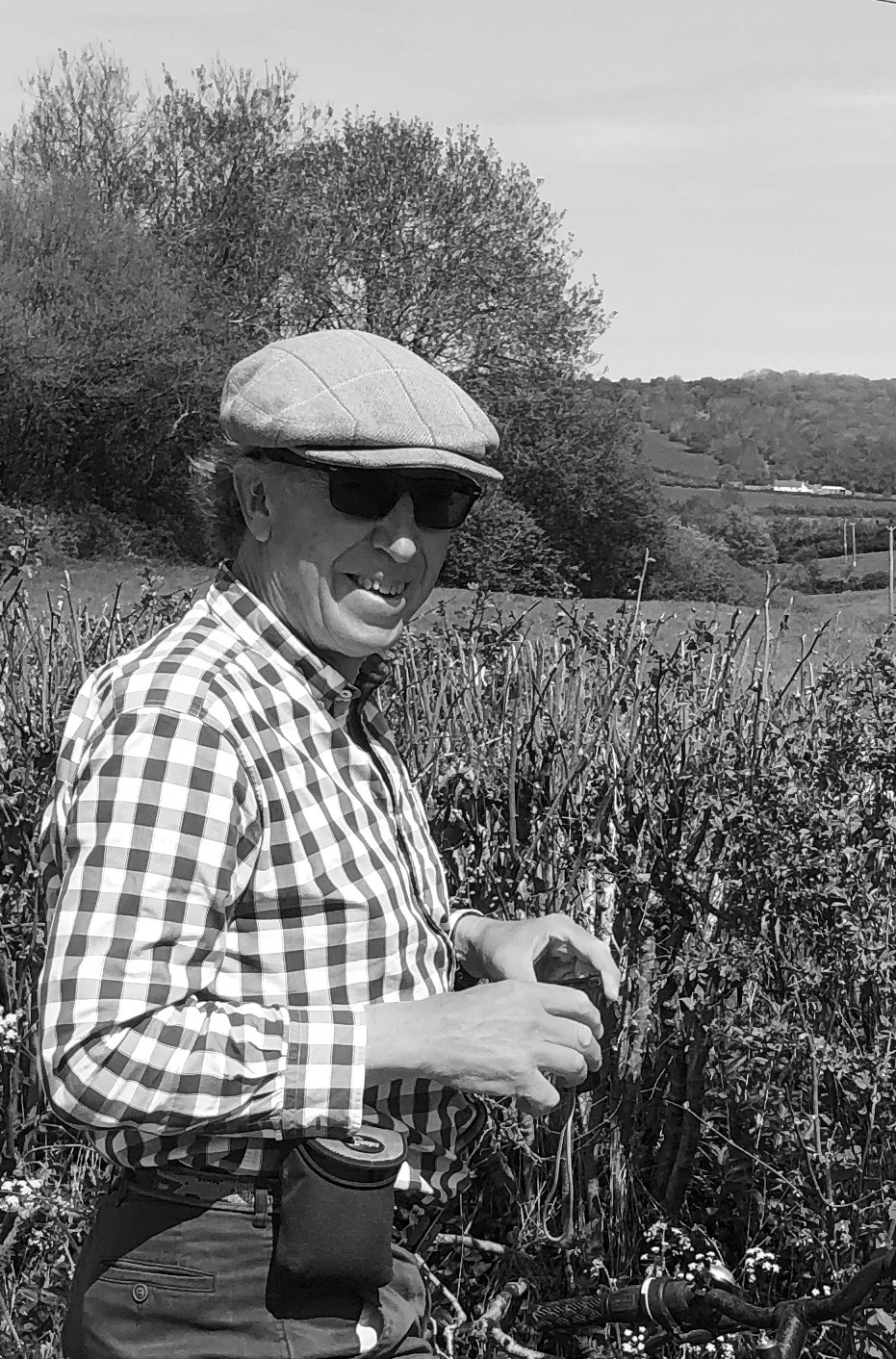 “If I am at home when you are staying in the Barn, I would be very happy to accompany you on a walk and explain more about what we are doing and why”
– Owen